The best-ever publicist for the city of Derry might be Lisa McGee’s hit show “Derry Girls,” the international phenomenon that will broadcast its third and final season on Netflix soon.
But last week, the Visit Derry sales and marketing manager Karen Henderson was also presenting a highly effective new mission to New York to boost tourism to the walled city from the US.
“Our message to America is that when you’re coming to Ireland just don’t think of Dublin or Galway, think of Northern Ireland and the city of Derry,” Henderson told IrishCentral.
“Derry is where the Wild Atlantic Way meets the Causeway Coastal Routes and you can use Derry as your base to travel to both in less than an hour.”

“We’re an all-year-round destination,” Henderson continues. “North America represents over 20 percent of our yearly visitor profiles. We know that many US visitors can already trace their own emigration story here, because Derry was a very important main port of emigration during the famine back in 1840.”
“And again we host a year-round series of events, such as the Jazz Festival, the Maritime Festival, and the truly epic Halloween Festival where the whole city dresses up.”
Visit Derry and their partners City Hotel, Walled City Brewery, and Bishop’s Gate Hotel presented their showcase to the travel trade and influential tour operators at P.J. Clarke’s on Third Avenue in New York City on Friday, June 24.
The City Hotel has 150 bedrooms that range from standard twin to superior king and they cater to a wide range of guests a representative informed the guests, including twelve special rooms that were added in 2013 (during its City of Culture year) that were designed and named after someone famous from Derry. 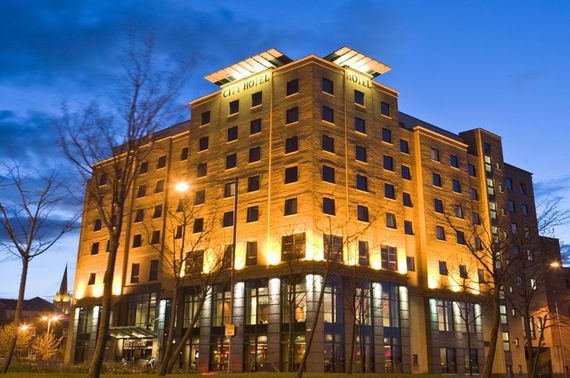 The striking and central City of Derry Hotel

The striking and central City of Derry Hotel
The City Hotel’s rooftop terrace offers panoramic views across the city. If you’re coming to Derry for the first time and you want to be in a central location that you can explore it all from, that’s exactly what The City Hotel offers, the clue is in the name.
The Walled City Brewery located just across the famous Peace Bridge in Ebrington is a small but mighty gastropub and noted hipster hangout that prides itself on providing a uniquely local experience from their one-of-a-kind craft beer to their bold yet delicious menu.

Located on London Street in the heart of the city, the Bishop’s Gate Hotel offers contemporary and stylish suites with views across Derry’s cityscape which have been designed to provide the ultimate sanctuary after a busy day exploring the historic walled city.
“Derry is ideally situated. For example, you can dip your toes in a beautiful beach just thirty minutes outside of the walled city,” Henderson told guests at the New York presentation.
“You can walk the historic walls, visit the Tower Museum and Free Derry corner, take in the many pubs and restaurants, and walk the iconic Peace Bridge – and I’m delighted to say the increasing numbers of American visitors is tremendous.” 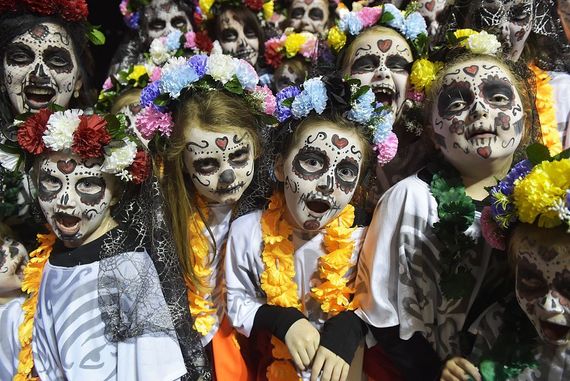 Derry City hosts the biggest Halloween parade in Europe
Alison Metcalf, Executive Vice President of Tourism Ireland North America added: “The City of Derry is one of the highlights of any trip to the island of Ireland and one of Europe’s hidden gems. We’re urging travelers to ‘press the Green Button’ and start planning and booking their long awaited trip.”
To learn more about Derry and its tourist offerings, VisitDerry.com
Are you planning a vacation in Ireland? Looking for advice or want to share some great memories? Join our Irish travel Facebook group.
Sign up to IrishCentral’s newsletter to stay up-to-date with everything Irish!
Related: Ireland’s Travel Secrets, Northern Ireland

No comments to show.